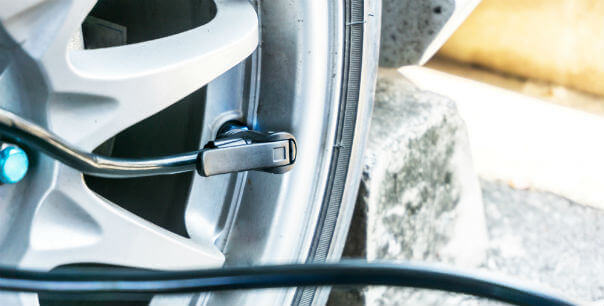 Nitrogen Vs. Air in Tires – Benefits of Nitrogen in Tires

Today’s modern gas stations, car dealerships, and automotive experts are offering the option to fill their customers’ tires with pure or higher concentrations of nitrogen (N2) versus air.

Typical compressed air is made up of water vapor and a variety of gases, including nitrogen, oxygen, carbon dioxide and argon. Nitrogen and oxygen account for the majority percentage of earth’s atmosphere.

To stay competitive, it’s important to offer customers the best option for their needs. Opting for nitrogen-filled tires versus air can make a difference in the performance of your customers’ tires.

Here are some important factors to consider:

Why Nitrogen in Tires?

Before you change the air in your tires with N2, it’s crucial to know the benefits of nitrogen in tires.

What’s the Advantage of Nitrogen in Tires?

Since nitrogen is not susceptible to rapid changes in temperature, this means you’ll have a constant tire pressure despite the speed at which you are traveling.

Nitrogen vs. Air in Tires

Nitrogen tire inflation typically costs more than inflating your tires with air. That’s because air pumps are more accessible and prevalent than nitrogen pumps. However, having access to these products can save money over time when you have your own supply.

When you use standard air-filled tires, you’ll want to check your air pressure at least twice a year. That’s because air typically leaks out over time due to improper alignment. On the other hand, nitrogen is less likely to seep out of the tire. This means you can expect the tire pressure to remain stable in a nitrogen-filled tire than one filled with compressed air.

If your tire stays at the correct tire pressure, then you should be getting the best fuel economy. However, with standard air-filled tires, your tire pressure could change simply based on the temperature outside and the speed that you’re traveling. These changes can impact your fuel economy.

The air in your tire is typically 78 percent nitrogen and 21 percent oxygen. Due to this lower percentage of nitrogen concentration, oxygen will retain moisture inside the tire. The moisture causes oxidation on the tire wall casing which can cause premature tire aging.

Almost every race car, heavy equipment, and planes have their tires filled with nitrogen. Unlike consumer tires, this is a must, due to extreme temperature conditions.

From enhanced fuel economy to better air maintenance, there are several benefits to filling tires with nitrogen as opposed to compressed air. It’s important to use nitrogen canisters, generators, systems and other products from reputable providers, such as NiGen.