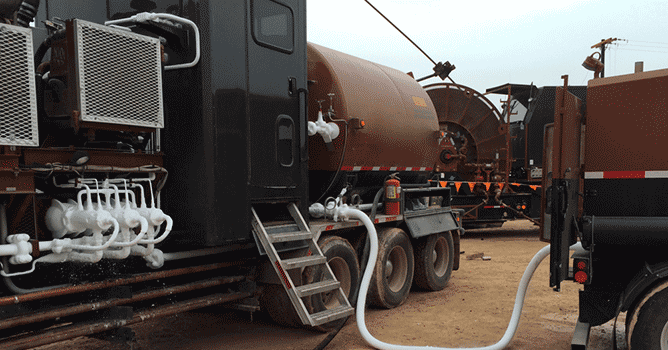 Gaseous nitrogen has countless applications in the oil and gas industry. While established uses for nitrogen gas, such as tank and pipeline blanketing, nitrogen purging, and inerting operations continue to sustain the industry, the use of nitrogen in drilling operations to boost dwindling reservoir pressures and maintain maximum productivity has become increasingly popular.

Nitrogen gas can be introduced into oil and gas reservoirs in a procedure known as nitrogen lifting. This technique can be used to restore satisfactory pressures to wellbores when natural formation pressures fall as wells age.

What Is Nitrogen Lifting?

Nitrogen lifting involves the use of nitrogen gas to achieve improved pressure within oil wells with diminishing productivity. As part of enhanced oil recovery methods, gas lifting can be used to reduce hydrostatic formation pressure and boost output.

How Does Well Activation by Nitrogen Work?

In many cases, liquids may accumulate within an active well preventing the easy flow of formation fluids. In these instances, nitrogen gas can be pumped into the reservoirs to remove these stagnating liquids and improve flow. The nitrogen gas is channeled through coiled tubes to pump out the accumulated fluids inhibiting optimal productivity.

Other Examples of Nitrogen Gas in Fracking

Using nitrogen in gas fracking activities is not limited to one area. Nitrogen gas uses in O&G are highlighted in the sections below.

Due to its inert nature, the use of nitrogen in downhole drilling operations has significantly reduced the risk of explosions occurring within confined spaces where hydrocarbons being recovered interact with air. Also, employing nitrogen gas facilitates the use of less heavy drilling fluids. This reduces the load on drill bits helping them function more efficiently.

Coiled tubing nitrogen supply can be used in place of traditional units for gas lifting, systemic cleanouts, and jetting. The nitrogen channeled through these coiled tubes is usually generated by dedicated on-site nitrogen generators coupled with compressors to boost the pressure of gas output.

Another effective use of nitrogen produced by on-site generators is in improving drilling techniques. For under-balanced drilling, reducing the weight of drill fluid improves production as a reduction in limiting hydrostatic pressures is achieved easily.

The removal of moisture and oxygen from oil and gas production processes is of utmost importance in maintaining equipment integrity. The oxidation and corrosion facilitated by the retention of these unwanted materials within the flow lines and other vessels can have economic implications for operators.

The use of nitrogen gas to purge oil vessels and flow channels will successfully mitigate the problem by reducing the oxygen saturation to acceptable levels. To achieve effective purging, the use of nitrogen with 95-98% purity in 4-8 cycles is routine.

Gaseous nitrogen can be used to maintain the pressure within reservoirs at an optimal level to sustain its lengthened productivity. Pressurizing gas formations above their dew points is critical to inhibiting the onset of condensation which will worsen negative hydrostatic forces within the gas well and diminish yield.

With sustained production, the natural formation pressure within an oil reservoir will inevitably start to decline and limit its output. In these instances, the only way to boost productivity is by the use of secondary methods or nitrogen injection for enhanced oil recovery. Nitrogen gas can be injected into an oil well with diminishing formation pressure to restore optimal yield.

To produce industrially useful quantities of nitrogen gas, the use of on-site nitrogen generators is most ideal. Applications in the O&G industry typically require nitrogen gas purities of 95 percent or higher. One of the three methods mentioned below can be employed to manufacture adequate quantities of gas.

For temporary needs, nitrogen generator rentals are a cost-effective way to get the job done.