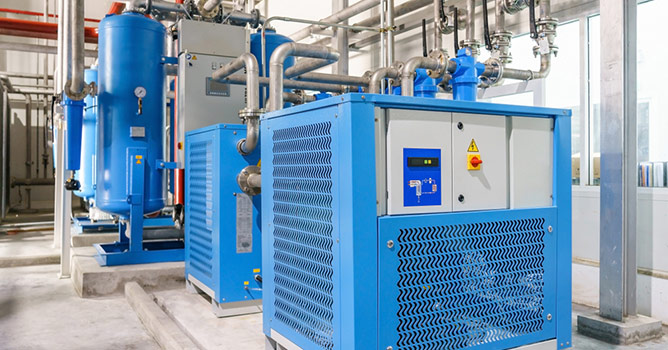 Differences between Aftercooler vs. Intercooler

Operators can mitigate the thermal effects of air compression by using devices like aftercoolers and intercoolers. This article covers the differences between an aftercooler and an intercooler.

Intercooler vs. Aftercooler for Air Compressors

The appropriate use of names for heat exchangers might prove tricky to inexperienced operators. While both intercoolers and aftercoolers are often used interchangeably, they refer to machines with subtle differences in design and operation. We clearly define how an intercooler differs from an aftercooler.

What Is an Intercooler?

An intercooler is a heat exchanger that functions to remove heat from the air generated by an air compressor. An efficient intercooler will restore the temperature of compressed air to near environmental levels.

How Does an Intercooler Work?

An intercooler is usually used in turbocharged engines to provide cooling to compressed air before it enters the engine circulation. By functioning as an intake air cooling unit, an intercooler permits the supply of more air to the engine by increasing the air’s density which in turn boosts its overall efficiency and power output.

What Is an Aftercooler?

An aftercooler is a mechanical cooling unit that operates on the principles of heat exchange between two mediums usually water and air. Aftercooler units can be used to attain temperatures between 5-20°F immediately after compressed air is released from the compression unit.

How Does an Aftercooler Work?

A standard aftercooler unit is composed of tubing (containing water or air) and fins that help it achieve cooling. When in operation, ambient air is pulled into the aftercooler to help remove moisture from the compressed air by condensation while reducing process temperatures to satisfactory levels. Compressed air aftercoolers are manufactured as either water or air-cooled variants.

What Is the Difference Between an Intercooler and an Aftercooler?

Although aftercooler and intercooler may be used to refer to the same device and function in the same manner, the circumstance in which they are used provides very subtle differences. While an aftercooler is a heat exchanger that operates by cooling the air emerging from a compression unit, an intercooler is a device attached to an air compressor that cools the air before engine intake.

By design, both intercoolers and aftercoolers will cause the cooling of compressed air by removing the heat generated during the compression of air. An effect of this heat exchange is the condensation of water vapor suspended within the air which can be collected allowing dry air to enter supplied processes. The elimination of water will protect moisture sensitive components and prevent equipment damage that might have arisen from moisture enabled corrosion.

How to Choose Between an Aftercooler vs. an Intercooler for Your Application

As earlier stated, both aftercoolers and intercoolers function similarly and may be used interchangeably. Depending on the target application, either cooling device can be used to remove heat from an industrial process. For applications where cooled intake air is critical to engine function, the use of an intercooler is advised.

Contact the NiGen team today for a quote or to learn more about how we can help with your industrial air needs.

Understanding Different Types of Compressed Air Dryers
30 June 2022
The Hydro Test Procedure for Boilers – How Does It Work?
30 June 2022
Everything You Need to Know About Industrial Air Filtration
31 May 2022 industrial air filtration
How To Pressure Test a Gas Line | Requirements, Tips & More
16 May 2022 pressure testing
The Importance of Nitrogen Gas Generation in the Food Industry
26 April 2022 food and beverage manufacturing, food industry
How Does a Rotary Screw Air Compressor Work?
19 April 2022 air compressors, rotary screw air compressor
Why Your On-site Process Gas System Needs Preventative Maintenance
7 April 2022
The Rising Need for On-site Nitrogen Generation in The Aerospace Industry
7 April 2022 nitrogen genertion, on-site nitrogen systems
Manufacturing and N2 Technology
3 March 2022 industrial applications, nitrogen generator, nitrogen systems, on-site nitrogen systems
Industries That Benefit from On-Site Nitrogen Systems
3 March 2022
We use cookies to personalize and enhance your experience on our site. Visit our Privacy Policy to learn more. By using our site, you agree to our use of cookies. Accept
Privacy & Cookies Policy