Nitrogen is one of the most abundant naturally occurring elements in nature. In its compound form, it can be used in industrial applications from medicine to food manufacturing to oil and gas production.

In this article, we will consider how nitrogen is produced on an industrial basis.

The generation of nitrogen gas on an industrial scale is usually done via three core methods.

The nitrogen gas generation technique for your application will depend on the industrial-grade nitrogen purity that you require. How do nitrogen generators work according to each of these working principles?

This method of nitrogen production works on the principle of differential separation of a gaseous mixture when passed through an adsorbent material. Special adsorptive material will separate gas fractions based on their molecular characteristics using a two-stage process:

Adsorption is the first stage of nitrogen gas production using the PSA method. This system features two adsorptive towers filled with carbon molecular sieve adsorbent material which selectively adsorbs oxygen allowing nitrogen-rich air to pass through the chamber and into a collection tank

This is a straightforward reversal of the adsorptive process. While one chamber is in the adsorption process, the other is simultaneously engaged in desorption. This second stage releases the oxygen trapped by adsorption and allows the renewal of the adsorptive tower in preparation for another cycle of adsorption. The entire process nitrogen production from air using PSA is relatively fast – taking an average of sixty seconds per cycle.

Membrane filtration technology depends on the use of a semipermeable membrane which selectively separates air into its constituent gases depending on their varied speeds of travel. The membrane surfaces are shaped in hollow fibers, which provide a larger surface area for faster rates of selective adsorption.

Hollow fiber nitrogen membranes are perfect for on-site nitrogen generators, as they are relatively quiet and safe to operate.

The most vital components involved in the industrial preparation of nitrogen gas using semipermeable membranes are highlighted below:

Every membrane-mediated nitrogen gas manufacturing process requires a protective filtration unit that will protect the membrane from the damaging effects of moisture from the compressed air sample.

Heated air supplied from immersion heaters passes over beds of activated carbon which will absorb any hydrocarbon vapor impurities before the air enters the filtration membranes.

A particulate filter is the last screening step in the production of nitrogen gas using selective membranes. This filter acts as a sieve for particles as small as 0.01 microns before the air enters the membranes. 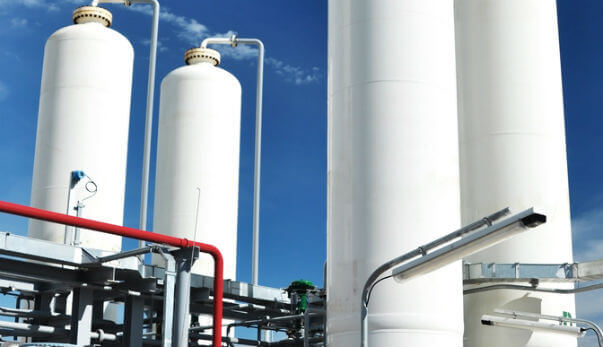 The inert nature of nitrogen in addition to its other physical and chemical properties make it ideal for use in a host of processes. There are several nitrogen gas uses in the oil and gas industry alone.

Nitrogen Use in Oil and Gas

Industrially manufactured nitrogen compliant with compressed air quality standards can be used for several onshore and offshore processes including:

Over time, the natural formation pressure of an oil and gas well will start to decline which leads to a reduction in production rates. A switch to a secondary recovery method will be needed. An effective method of sustaining gas well production is the use of nitrogen injection into the reservoir as an enhanced oil recovery technique.

Nitrogen gas can be effectively utilized to remove impurities and keep gas lines dry. Dehumidification and pipeline drying is essential to prevent corrosion of gas storage facilities and interference of water vapor in various industrial processes.

This process involves the use of gaseous nitrogen to displace hazardous gases from an industrial process. Due to the inert nature of nitrogen, it will also exert a stabilizing balance on industrial processes having high risks of spontaneous combustion.

Nitrogen gas is introduced into storage tanks to prevent the occurrence of adverse chemical reactions between volatile hydrocarbon compounds.

Manufacturers of perishable food items use nitrogen to prolong the shelf life of their products.

To learn more about our products and services, please contact a member of our team online today!

This website uses cookies to improve your experience while you navigate through the website. Out of these, the cookies that are categorized as necessary are stored on your browser as they are essential for the working of basic functionalities of the website. We also use third-party cookies that help us analyze and understand how you use this website. These cookies will be stored in your browser only with your consent. You also have the option to opt-out of these cookies. But opting out of some of these cookies may affect your browsing experience.
Necessary Always Enabled

Any cookies that may not be particularly necessary for the website to function and is used specifically to collect user personal data via analytics, ads, other embedded contents are termed as non-necessary cookies. It is mandatory to procure user consent prior to running these cookies on your website.