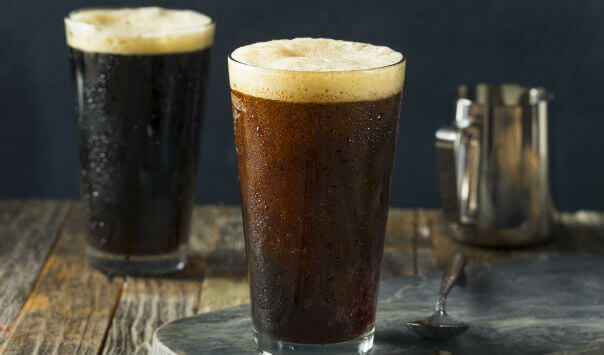 What Is Nitro Beer? – How to Nitrogenate Beer

With an unlimited number of alcoholic beverages available to beer enthusiasts worldwide, brewers are always on the lookout for the next breakthrough in delivering a more pleasant drinking experience. Using nitrogen gas for food, such as nitrogen for modified atmosphere packaging, nitro cold brew coffee, and nitro beer have become very popular as of late.

Traditionally, most beers are infused with carbon dioxide (CO2) to create a lively bubbly finish. However, some distillers are replacing CO2 with nitrogen to create a different perspective on their favorite draughts.

What Is Nitro Beer?

Nitro beer is beer that is finished using nitrogen instead of carbon dioxide. A nitrogen-infused beer has a smoother, creamier look and taste largely due to the smaller gas bubbles produced when it interacts with beer. These characteristic effects are because nitrogen is largely insoluble in liquids and as such gives the person sampling a nitro beer a “heavier” mouth feel.

There are pros and cons to completing a brewery process with either carbonation or nitrogenation. On one hand, we have carbonation which is a longstanding traditional approach to beer making. Carbonation creates a brew with larger bubbles offering a lively, coarser feel on the tongue. By contrast, a nitrogen beer setup results in a brew with smaller bubbles than a carbonated one.

The debate between experts on which process creates the superior beer is unlikely to conclude any time soon. If properly done, either method will result in a superb drink with consumers rating based on subjective expectations of how a beer should look, and what it should taste like.

By combining a mix of nitrogen and CO2 under elevated pressure, brewers can create a nitro beer. Compared to carbon dioxide, nitrogen is highly resistant to dissolution and this property is exploited to obtain a beer with high keg pressure but low carbonation. Depending on the beer type being nitrogenated, the applied pressure is varied. For a stout, about 8 psi of pressure is sufficient to nitrogenate the brew.

The cascading effect seen in a glass of nitrogenated beer is due to the varying rates of dissolution when interacting with the beer liquid. When served, the nitrogen gas bubbles are pulled down the sides of the glass while the CO2 bubbles rise through the middle. Further, the use of a restrictor plate placed in front of the faucet will form very small bubbles in the served beer giving it a thick, creamy head with a smoother, less acidic mouthfeel.

Gas Composition of a Nitro Beer

Nitro-beers typically have a gas composition of 70 percent nitrogen and 30 percent carbon dioxide. The absence of oxygen gas in Nitrogenated beers allows them to retain their flavors longer as oxidation is minimized.

Nitrogen gas has become almost indispensable in the brewing industry as its use is integrated across various phases of the beer-making process. Some key uses of nitrogen gas in breweries are outlined below:

Where to Buy an Onsite Nitrogen Generator for Breweries

For large scale, long-term brewery operations, it is a smart business choice to invest in a nitrogen generator rather than depend on the use of nitrogen gas supplied via gas cylinders. However, purchasing an onsite nitrogen generation system should be given a fair amount of thought. It is advisable to purchase your onsite nitro brewery generator from a trusted source.

The foremost benefits of integrating nitrogen generators in breweries are a reduction in overall production costs, efficient gas usage with no wastage, and a reduction in downtime.

Although the cost of purchasing and installing an onsite nitrogen generator might seem steep, in the long term it costs significantly less to operate when compared to the amounts spent on the gas supplied by cylinders

The use of an onsite generator will allow operators to produce only the required amounts of the gas when needed. This boosts efficiency as all the gas produced is utilized in the associated processes without any waste. You can also select an onsite generator that delivers nitrogen purity grades to suit your exact application.

Brewers operating with nitrogen supplied by gas cylinders might experience downtime where their production processes are halted due to supplier delays. Purchasing a nitrogen generator eliminates this problem as the required amounts of the gas can be generated around the clock without interrupting the production cycle.

At NiGen, we offer the most efficient nitrogen generation systems and industrial air dryers suited for use in your brewery. Our nitrogen generator supply and installation services are designed to help cater to all your nitrogen gas requirements.

Contact us online today to learn more about how our food-grade nitrogen generators can support your brewing needs.

Understanding Optimal Temperature Ranges for Air Compressors
27 January 2023
How to Make Air Compressors More Eco-Friendly for Your Business
27 January 2023
Tips to Use Your Air Compressor More Efficiently in 2023
23 December 2022
Supporting Tank Cleaning Companies with On-site Nitrogen
28 November 2022
How To Calculate Compressor Free Air Delivery (FAD)
13 November 2022
Is It Time to Upgrade Your Nitrogen Equipment?
27 October 2022
Signs It’s Time For An Air Compressor Audit
27 October 2022
Single Stage vs. Two Stage Compressors: What’s The Difference?
30 September 2022
Nitrogen Generators for Fire Sprinkler Systems: How Do They Work?
30 September 2022
Compact Nitrogen Generators: Everything You Need to Know
29 August 2022
We use cookies to personalize and enhance your experience on our site. Visit our Privacy Policy to learn more. By using our site, you agree to our use of cookies. Accept
Privacy & Cookies Policy